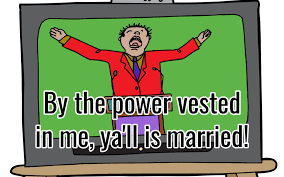 I have probably seen every episode of The Big Bang Theory. We can talk about my questionable choice in sitcoms another day. In one episode, quintessential nerd Howard teams up with NASA to go to space and the launch gets moved to a date that interferes with his planned wedding to Bernadette. The couple has to pivot and they end up getting married on a rooftop and *so cute* the other main characters of the show all get ordained and perform the wedding.[1]

Awww, so sweet, right? There is obvious appeal to having a friend or family member officiate your wedding, it adds an even more personal and special detail to a momentous day.

If you look at N.C. General Statute § 50-51, it states that a marriage must take place either 1) in the presence of an ordained minister of any religious denomination, a minister authorized by a church, or a magistrate or 2) in accordance with any mode of solemnization recognized by any religious denomination, or federally or State recognized Indian Nation or Tribe. In 1980, in State v. Lynch, a man’s conviction for bigamy was reversed after the NC Supreme Court found his one of his two marriages was invalid due to the fact it had been solemnized by a ULC officiant who “bought for $10.00 a mail order certificate giving him ‘credentials of a minister’ in the Universal Life Church, Inc.” The court went on to say that ULC had “no traditional doctrine” and that they would “ordain anyone, without question to his/her faith” and that, getting ordained by ULC did not require one to give up membership with any other church in order to be a ULC minister. For these reasons, the court did not agree that ULC ministers met the criteria set forth in the statue.

Was your marriage solemnized by a ULC officiant and now you are panicking? The good news is that marriages performed by a ULC officiant are voidable, not void –which is a big distinction. A void marriage is unlawful, nonexistent by operation of law, and cannot be rectified. A voidable marriage is one that can be canceled or undone by a court but can also be made valid by inaction or consent of the parties. In at least two instances, the NC Court of Appeals has refused to allow the fact that a marriage was solemnized by a ULC officiant to prevent a party from pursuing claims for equitable distribution and alimony.

[1] Here is the YouTube clip in case you want to waste 5 minutes of you day: